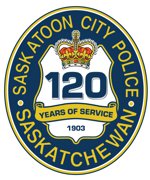 
A 25 year old Saskatoon man is facing charges following an investigation by detectives in the General Investigation Section into an attempted armed robbery.

The man was located at a home in the 300 block of Haviland Crescent yesterday and brought into custody.

He is facing a charge of robbery, possession a weapon and carrying a concealed weapon, along with a charge of breach of undertaking.

Saskatoon Police are investigating an attempted armed robbery that occurred at a bar this afternoon.

Police were called to the business in the 3000 block of Diefenbaker Drive. Staff reported that a man entered the bar, demanded cash and when employees resisted turning any money over, he released pepper spray into the air. The suspect then fled the scene, stealing a patron's bicycle on the way out.

Two people were treated for the effect of pepper spray.

The suspect is described as 6' in height, with a tattoo on the side of his neck. He was wearing a black ball cap and a dark coloured jacket or hoodie with the word "POP" on the back.

Anyone with information is asked to contact the Saskatoon Police Service at 306-975-8300 or Crime Stoppers.